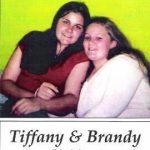 On Sept 24,2005 @ 1:42AM in Chesterfield County, VA Brandy Cave and Tiffany “Tippy” Toney were Killed after being stuck head-on by a drunk driver driving up the wrong side of the road.

Brandy and Tippy were my cousins by birth, but we were more like sisters. Brandy(17) and her sister Tippy(16) were traveling to help a friend who’s car had broke down when this occurred.

It happened on the night of their older brothers birthday. He was also the first on the scene. The guy that hit them never once tried to hit his brakes. He Hit them going 60mph. He hit the car more on the driver side causing the car to bow. Brandy was in the driver’s seat. Everything came in on her. Their friend was in the passenger seat with the steering wheel in her lap. She lived after numerous operations to keep her alive. Tippy who was sitting behind Brandy had the drivers seat in her lap. It crushed her spine and severed her spinal chord in 3 different places. Tippy suffered a lot of pain for the 30mins that she clunge to life. Our whole world went to pieces.

The days following that were the hardest of my whole families lives. Putting two young girls in the ground before their time is the hardest thing for a mother, father, aunt, uncle, or cousin to do. These girls were friends with everyone they ever met. We sit around today telling stories of them that we all experienced through out the years they were here on earth with us.

And while this time of year still makes me sad and makes the tears follow, I know their angels now watching down on each and every one of us.

I love you girls so much and if i wish everyday i could bring ya’ll back I miss you! RIP Brandy Cave and Tiffany Toney