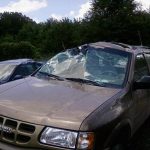 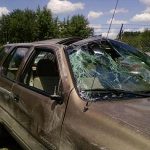 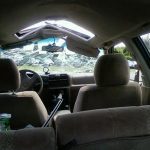 I am a survivor of an accident due to Teen Drinking & Driving. No, I wasnt driving I was a front seat passenger on one scaryyy ride home. The accident happened on July 15th 2011 in Bethel Delaware. There were 5 of us in the vehicle: the driver, my ex boyfriend…me…and three passengers in the back seat, my best friend, my cousin & the drivers friend. We had spent the day at another friends house swimming. There was alcohol at the “party”, however none of us were with the driver the whole day. We had known he had one or two drinks but that was it. Me, my friend, & my cousin had not been drinking. We all had a blood alcohol test done and they all came back negative. We had left the house 30 minutes prior to the accident to go to a corner store to get chips and soda, my ex boyfriend drove perfectly fine, he did not speed or get swervey or anything. When we got back to the house, we kind of stayed in his truck and talked and listened to his music. He went to go get his friend because his friend had to be home. Him & his friend jumped in the car and they said we were leaving again. Well as we were leaving my mom called, asked if my ex could drop us off at home when we were done so we could go grocery shopping. I said yes, and hung up the phone. Within 6 minutes later, my mom got a call back from a frantic girl, my best friend, screaming saying we had been in an accident. When I got off the phone, I turn the radio down to talk to my ex and ask him a question. I then noticed we were picking up speed like crazy. I had pleaded for him to slow down and he kept saying “no i got it”. We were at about 125 mph and all of us in the car were then screaming for him to slow down. Again he kept yelling that he had it. There was a bend with a guard rail. He lost control, tapped the guard rail and when we got back on the road almost had a head on collision with another car. He snatched the wheel. And by that time there was a road sign saying there was a sharp turn ahead. I snatched my cell phone, knowing we werent gonna make it and were gonna need to call for help. By the time we reached the turn, we were still at about 125-130mph. He slammed on his brakes and we went sideways into some mans yard. He snatched the wheel to the left and we headed towards some trees. We barely missed them when he snatched it to the right. By this time one of the tires had blown on the truck and it went airborne, witnesses said about 5-6 feet. The truck then flipped about 4 times. I was the only person in the car wearing my seat belt, thank God I did, because i was ejected out of the car. However my upper torso was stuck in my seat belt so I wasnt fully ejected out of the car. We did land on all four tires. The three passengers in the back seat were shockingly fine. No injuries. My ex boyfriend got a slight concussion from the accident. I suffered the worse. Both my knees were ripped completely open and were cut about 2inches deep. You could see the bones and meat inside my leg. My right ankle was fractured. The quadricep tendon in my left leg was torn off and my knee cap was in my thigh. These injuries came from the ejection. Every time the car flipped my legs slapped against the road. Somehow the impact and force from the landing, I was sucked back into the car. I also suffered from a severe concussion and a deep bruise to my sternum. My head was cut up. It was a mess. I blacked out and dont remember much after the accident. I was wheelchair bound for nearly 2 months. I just started walking again with crutches and i have an immobilizer on my leg. Doctors and therapists are amazed with my progress but do not think I will ever walk normally again or have full use of my leg. All I know is, someone was watching over us. By the way, my ex blew a .079, one point away from the legal limit.