Smartphone Breathalyzers: Should You Get One?

Smartphones are getting smarter. With the right apps, your device can monitor your heart rate, manage your finances and help you find love. But a smartphone breathalyzer? There’s been buzz surrounding this topic for years. More than 10,000 people died in alcohol-impaired car accidents in 2012—that’s one every 51 minutes, according to the National Highway Traffic Safety Administration. The current breathalyzer apps not only take smartphone capabilities to a new level, but they just may be saving lives, too. Here’s what’s new with the latest breathalyzer apps and why you need one:

Whether a drinker uses a breathalyzer app to avoid driving drunk or someone uses breathalyzer app results to keep a friend safe, awareness is crucial. You may think you’re fine because you’ve “only had a few,” but depending on your weight and the type of alcohol you’re drinking, you might be drunker than you think. A person of average stature drinking a couple of light beers at a leisurely pace will take longer to get drunk than a thin person drinking hard liquor. A few other factors affect how drunk you get and how fast you get there, including:

A breathalyzer app lets drinkers know about their level of inebriation and helps them understand how drinking affects their bodies. A bartender using a breathalyzer app to test his customers before over-serving them would be acting responsibly by showing them readouts, especially blood alcohol levels close to or over the legal limit. A fraternity or sorority could prove they throw responsible parties by using a breathalyzer app at the door so people don’t drink and drive. Teens could use it to prevent each other from driving impaired and show they care about safety.

There are several legitimate breathalyzer apps available for both Android and iOS mobile devices that provide drinkers with immediate blood-alcohol level results so they can make better decisions about drinking and driving. If you’ve already upgraded to the new iPhone 6, consider the BACtrack, Breathometer and Alcohoot apps. At between $50 and $100, they are relatively inexpensive. 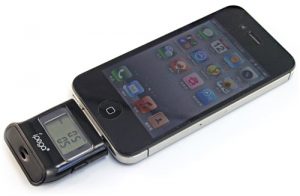 If drinkers know their blood alcohol level is over the legal limit, they can make other arrangements for transportation instead of getting behind the wheel. Some breathalyzer apps even have push–button cab service. These apps can also estimate when a drinker’s blood alcohol levels will return to zero, so friends can estimate how long a drinker needs to sober up before driving.

The U.S. Centers for Disease Control and Prevention says impaired drivers are involved in about one in three crash deaths. This alone is a compelling reason to use a phone breathalyzer. While the effectiveness of strict .08 percent BAC laws, sobriety checkpoints and harsh legal ramifications for driving under the influence is debated, having a handheld breathalyzer to tell you when it’s not OK to drive combats the problem immediately. It keeps unsafe drivers off the road, stopping the problem before it’s even started.